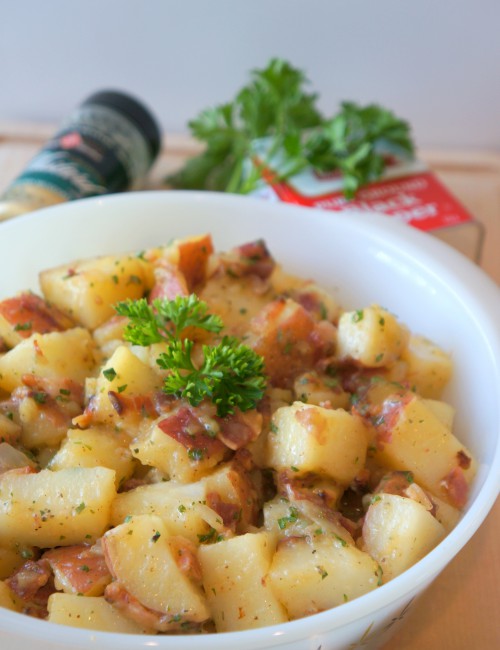 I think most people will agree with me when I say that bacon makes everything better. Let me clarify – bacon makes most dishes better by adding richness and a smoky, salty goodness. There has however been an abundance of bacon flavored products that have surfaced over the last few years and some are a little questionable.

As you can tell I’ve still been riding the German food wave that I caught about a month ago. When I came across this recipe for potato salad, I knew I had to try it because one, it’s German and two, bacon. 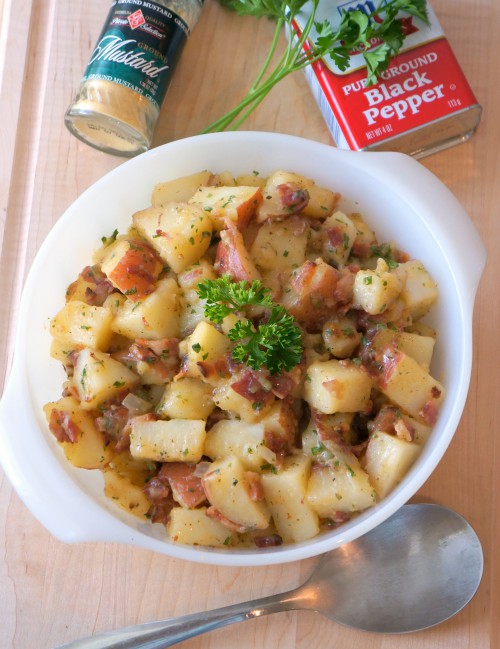 Truthfully, I’ve never had German potato salad before and if I have, I wasn’t aware of it. This dish is brand new to me and it differs from the traditional counterparts since the dressing is an oil and vinegar base instead of mayonnaise and is best served warm or at room temperature. This salad is tangy and has great flavor from the additions of dry mustard, parsley, and thick cut bacon. It makes a great alternative to a mayo based side and perfect for those Summer barbecues.

We loved this dish so much that it might just become a staple in my household for all year round!

Boil potatoes whole in skins in a large pot until cooked. Drain and let cool.

Prepare the onion, parsley and the spices.

Fry bacon in a large frying pan until crisp. Remove from pan and drain on a paper towel, keep bacon drippings in the pan.

With pan on medium heat, add cornstarch and onion to the bacon fat. Mix well. Stir in vinegar, water, sugar, salt and spices. Cook only until mixture is of medium thickness and remove from heat. Start with adding approximately half of the mixture to the potatoes and bacon and mix gently with a spatula. Add more dressing until a creamy consistency is reached. (I actually only end up using about 2/3-3/4 of the dressing) Add in parsley and additional salt if needed.

Serve warm or let it cool to room temperature and refrigerate until ready to serve.